When you think of ambulances, you often think of the publicly funded EMS, or emergency medical services, truck, and crew. They are on call 24/7 and will respond to emergency calls such as vehicle accidents, house fires, and other emergencies where having a medical transport vehicle is needed. But this isn’t the only time that an ambulance is used. There are often times when having an ambulance transport a patient between medical facilities is needed, but these are not emergencies. In these cases, a private ambulance service can fulfill these needs in Houston, Austin, Miami, Orlando, Tampa, Tallahassee, and the surrounding areas. Amera Solutions has private ambulances ready to serve your needs. 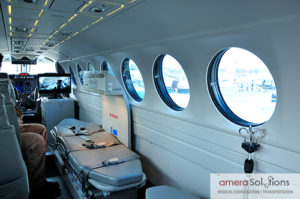 As previously mentioned, when it comes to an emergency, public ambulances are the ones that will be responding. However, there are differences between ambulances even in the public realm. Emergency medical technicians, or EMTs, are what you would normally find on ambulances, however, if intravenous lines are needed, you need a paramedic on site. If an ambulance in an emergency situation needs a paramedic-staffed ambulance, even a private ambulance service can respond to provide help if they have a paramedic on staff.

While in an emergency you will likely deal with a public ambulance service, for the rest of the medical transport needs and desires, you can work with a private ambulance service that is just as skilled and trained as their public counterparts. Amera Solutions has private ambulances for your needs in Houston, Austin, Miami, Orlando, Tampa, Tallahassee, and the surrounding areas.